Musa’s legs begin to ache having held position for too long. He’s certain now that the tree bark has properly engraved itself into his back. The sun is up and shining brighter than ever, yet it feels colder than a polar bear’s toenail out here. The clouds move way too fast in opposite directions. Red clouds. Blue clouds. Orange clouds. One big purple cloud. Huh, no yellow clouds. Ants start marching along the branch he’s sat on. His hand is losing its grip and slowly slipping off. His lower body can no longer support him, it’s drained out of strength. He is falling. The ants are marching. Suddenly there is a bellowing of a car engine coming to life and Musa freezes mid-fall. There is too much light. Way too much. His eyelids still heavy, he glances at the alarm clock beside his bed. 7:12 AM.

He’s late again. He jolts out of bed just in time to see his father’s car leave through the window. Bothered by the fact that no one woke him up, he sprints to the bathroom. Washing the sleep off his face. Brushing his teeth. Back to the bedroom. Kurta. Socks. Pants. Topee. Kitchen. No, there’s no time for breakfast. Outside. Hopping on his bicycle and holding out his fingers, ‘three, two, one’ indicating the remaining seconds till the whistle blows. He’s determined to reach before the class ends. Then he pedals so fast, one would think he had disappeared.

GO, Musa. GO!  he encourages himself. The crowd erupts. Every spectator knows. Musa was there for his father, his mother, his family, but most importantly, his Quran teacher, Mr.Yunus (who is probably planning his detention for being late at this very moment). Their voices, a wall of sound, carries Musa up the hill. Musa explodes upwards with everything he has. Now riding with his humble old, rusty bike. His legs are on fire. Somewhere in the back of his mind, he notices the wind he created behind him. His Jumma school is just up ahead.  His friends Adnan, Khalid, Umar, his family and grandparents are alongside the street. They are all calling, 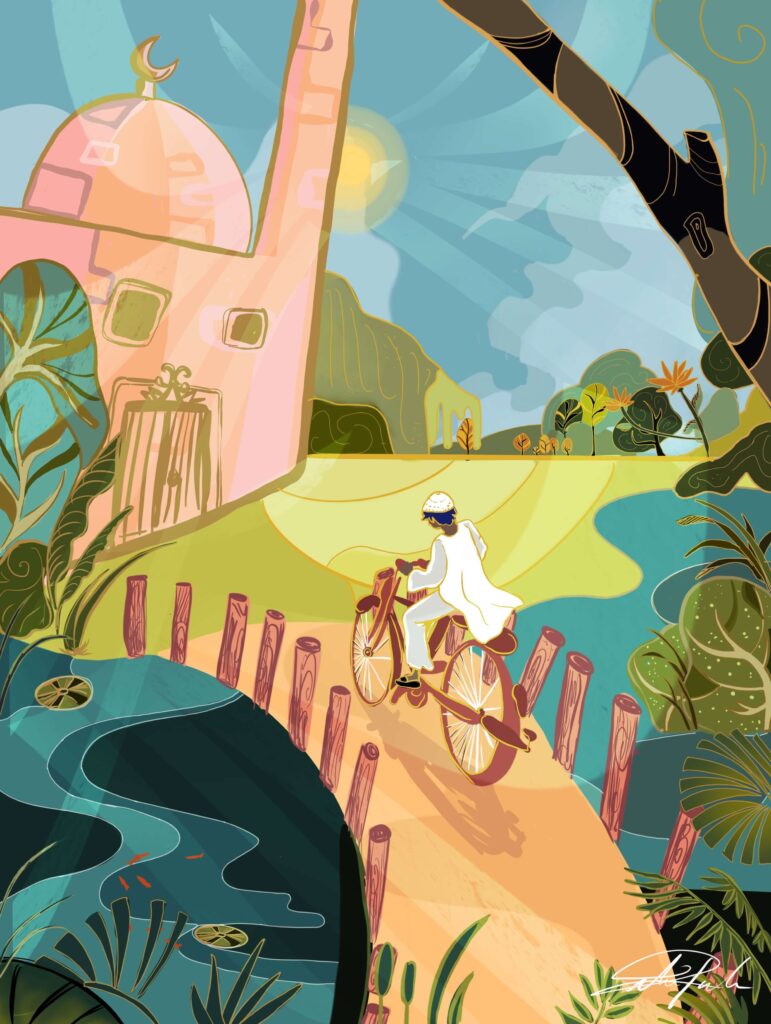 It’s a twenty-minute route from home. He’s now halfway there in just seven minutes. New record.  He’s never gone this fast before. Cold air fills Musa’s lungs. His heart beats as fast as it can. Stomping down his right foot on the pedal halfway up the hill, he remembers the tranquility of his first morning salah in 2012 with his grandfather. And now the road is exploding around him, willing him upwards. Adnan, Khalid, Umar, his father and mother – they’re all there with him. The shouts of the crowd fillhis mind.

“Go on Musa! Push. Go, you can do it!” Musa pushes and pulls at the pedals as hard as he can. Now the road dives down, the path becoming steep. Really steep. He pushes the bike over side-to-side to get some leverage and pulls on the bars. Only two-hundred-and-fifty meters to go.

Two-hundred-and-fifty. Time slows and his eyes are becoming bloodshot. Each pedal stroke forces more fuel to burn. Anaerobic now, his muscles are starting to destroy themselves, they cannot keep it going. His brain ignores the pain – keep it going. Another hundred meters are gone. The road eases, the pain increases. His lungs are bursting.

Collapse feels imminent. Fifty meters to go. He can see his madrasa from so close. The bicycle pushes; he hears Adnan, Khalid, Umar, father and mother shouting now – one last effort. Ten meters, five. The line.

Silence. No cheering. No shouting. The crowd disappears.

Everyone is giving him weird looks as they file out the doors. Adnan and Khalid are there too. He glances at his wristwatch. 7:26 AM.  He still made it before seven-thirty, why is everyone out? Umar ran up to him.

Well, he thought between pained breaths, at least. I. Tried.

ZimBey is a high-school senior, the resident artist at RQ and a BJJ white belt (for now!). When not in her backyard hanging from a pull up bar, she may be found in the kitchen whipping up her newest culinary masterpiece.